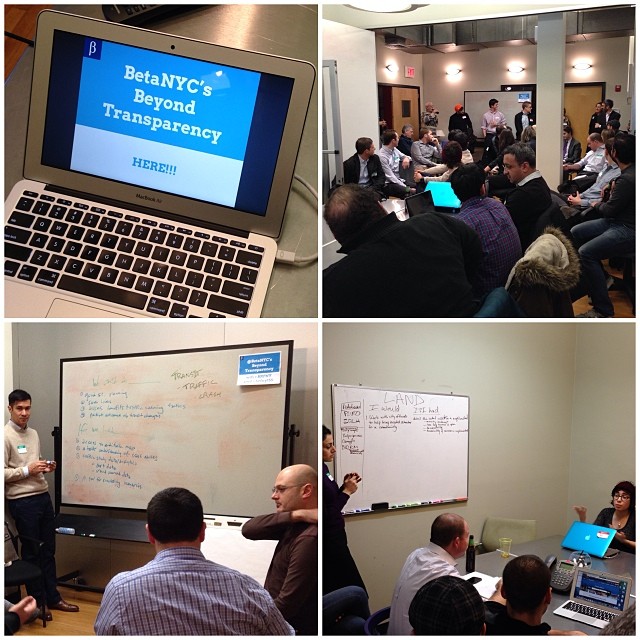 QUICK RECAP: For the next seven weeks, BetaNYC is exploring how to build tools for City Council, their staff, and Community Boards. This is us doubling down on our open data and open government advocacy, while educating a new crop of elected officials and their staff. BetaNYC’s #BeyondTransparency will culminate in Code Across NYC, a weekend long hackathon on 22/23 Feb.

Wed night, 48 people crowded Blue Ridge Foundation to attend “Beyond Transparency: Building tools for City Council & Community Boards.” For 2.5 hours, we outlined an 8 week strategy to build tools for NY City Council, their staff, and Community Boards. In attendance, we had several current and former community board members and a handful of former city council staffers. Lastly, we had a representative from the Manhattan Borough President’s office talking about his experience working in the council and what community boards are starting to ask him from the Borough President’s office.

For our breakout conversations, we outlined five target that City Council and Community Boards deal with frequently: 311, Public Safety, Transportation, Education, and Land Use.

Then, we prompted the attendants to break out into rooms and discuss relevant projects they would like to see developed. After an hour, you can see response below…

Next week, we will tackle public safety and crime data.

“I can do better advocacy, if I had data that is easier to understand and to look at.”

“I want our meetings to be streamed, and edit it down a 3 hour meeting to 10-min greatest hits. If we had easier to understand 311 data, we could have more productive CB meetings.”

If we had a commute time filter we could build better school choice tools for students.

We also had an interesting conversation about strategies for involving students in civic efforts in their communities, but did not come up with any concrete project ideas.

Kudos to the education splinter group who are addressing the need for NYC middle school kids to be informed and empowered as they face the very real and unique challenge of selecting a high school. By creating a public transportation build-out to the school search interface, they’re enabling parents and students to widen their search range. As one team member pointed out, and the study below confirms, lower-income kids can really use as much information as possible, since school choices tend, by default, to be based on proximity. This very often means selections of lower-performing schools by students in economically disadvantaged neighborhoods. By streamlining the process of determining public transportation options, selecting a school outside of a presumed range may seem more doable.

Check out the study on high school selection here:

We could do better street planning if we had access to an editable map.

We could save lives, if we had a better understanding of causes of crashes and better allocate personnel (police) to "Areas of need” and accident prone zones.

We could predict outcomes of transit changes if we had a tool for simulating traffic scenarios.

We could share good ideas/at government level if we had a tool for communicating conditions/situations/ideas in a more credible data-centric format (quantifiable).

We can have more comprehensive decisions on infrastructure improvements if we had complete information on traffic violations and crash data.

I could provide a better interface for crash data entry if we were able to work with the NYPD to facilitate a unified entry point for data.

If we had data broken down for every major street redesign, we can better understand the impact of those redesigns.

If the NYPD publicized their recommendations on and underlying data to Department of Transportation for street redesigns, elected officials, community boards and the public could participate in the decision making process.

If I had: Detail the retail use/etc in a neighborhood

I would: Work with city officials to help bring needed amenities to a community.

If I had: Access to DHCRs DB of rent regulated tenant

I would: find bad actors on property and prevent them from getting permits

If I had: a list of all building violations

I would: not waste time looking at apartments in a moldy building

If I had: a list of Department of Building and Housing Preservation and Development complaints across all buildings

I would: avoid landlords who are difficult

If I: knew how many trees were in a neighborhood

I would: know which neighborhoods I would like to live in.